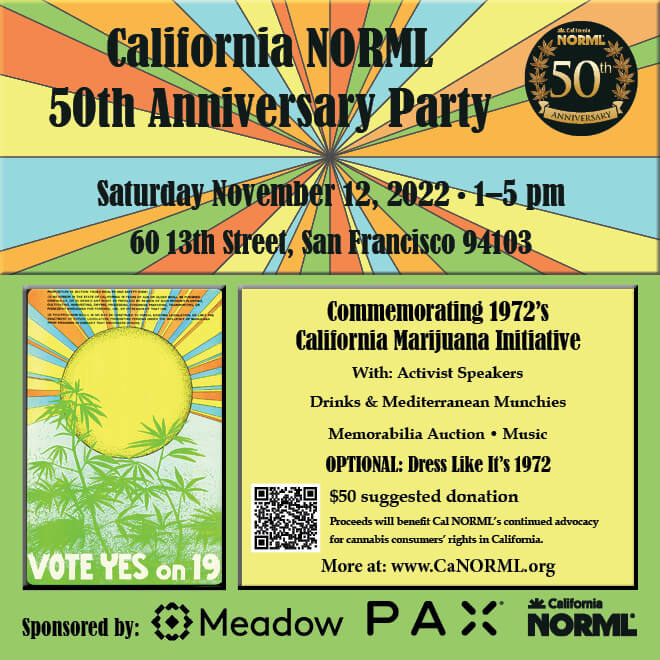 The public and press are invited to celebrate the 50th Anniversary of California NORML and commemorate the 1972 California Marijuana Initiative, the country’s first cannabis legalization ballot measure, on Saturday, Nov. 12 from 1-5 PM at Meadow, 60 13th St. in San Francisco.

The event is sponsored by Meadow, the top-rated software solution for cannabis dispensaries, and by PAX, a global cannabis brand headquartered in San Francisco.

“Cal NORML has been at the center of legalization efforts in California for five decades,” said David Hua, CEO and Co-Founder of Meadow. “At Meadow, we have always looked for ways to support the collective effort of pushing cannabis legalization forward, and we’re proud to be part of this event in the spirit of continuing to build community while honoring the history and future potential of the cannabis plant.”

“Supporting this historic event and California NORML is part of PAX’s strong commitment to Social Reform, Sustainability, and Safe Access in cannabis,” said Laura Fogelman, Vice President of Communications and Public Affairs at PAX. “This team has been at the forefront of the movement for more than 50 years, and we’re thrilled to be able to celebrate not only this milestone, but the outsized impact they’ve had on our communities along the way.”

Cal NORML, the state chapter of the National Organization for the Reform of Marijuana Laws, sprung from the organization Amorphia, which financed CMI with sales of rolling papers. Although the measure did not pass, it lead to the decriminalization of marijuana possession in California (the 1975 Moscone Act), and ultimately to greater reforms in California, the US, and the world.

Leaders from the CMI initiative will share their reminiscences, live or via Zoom. Among them will be:

The event will also celebrate the 50th anniversary of Cal NORML, which has advocated for the rights of cannabis consumers in California since 1972. Cal NORML was instrumental in the passage of Prop. 215 (1996), the country’s first medical marijuana law, and this year two Cal NORML sponsored bills were signed into law: AB 2188 to protect the employment rights of cannabis users, and AB 1954 to protect pain patients’ rights to medication. The organization has recently published a voter’s guide to the November 8 California election.

Food and drinks will be served, a memorabilia action will be held, and live music will be heard. Attendees are invited to Dress Like It’s 1972 (optional, but fun).

The press is invited to attend. RSVP to ellen@canorml.org. You can also contact us for graphics to include in stories.