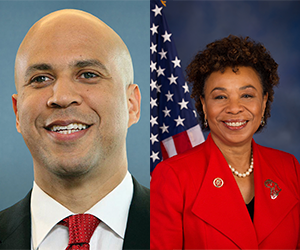 WASHINGTON, D.C. – On Thursday, lawmakers reintroduced legislation that would end federal marijuana prohibition and allow states to determine their own cannabis policies without the threat of federal interference. The Marijuana Justice Act was originally introduced by Rep. Barbara Lee and Sen. Cory Booker and garnered 43 cosponsors in the House and six in the Senate in the last session. It is currently the most far-reaching and comprehensive cannabis policy reform legislation being considered in Congress. The bill would remove marijuana from the Controlled Substances Act schedule and eliminate federal criminal penalties for possession, cultivation, manufacture, import, and export of cannabis.

“Regulating cannabis is working in the states and we’re pleased to see that this Congress appears to be making federal reform a higher priority than in previous years,” said Aaron Smith, executive director of the National Cannabis Industry Association. “Hopefully this legislation will get the serious consideration it deserves. The country is ready and eager to move past prohibition, start addressing the impact it has had on marginalized communities, and explore the economic potential of replacing criminal markets with regulated small businesses.”

The bill includes several provisions to address the historically discriminatory enforcement of cannabis laws and sentencing. All federal cannabis use or possession convictions would be expunged under the measure, and a special grant program would be created through the Department of Housing and Urban Development to reinvest in communities that have been most impacted by prohibition. It would also allow Congress to withhold federal funds from states that exhibit racially disproportionate arrest and incarceration rates under their own cannabis laws.

“We cannot talk about making cannabis legal without considering how to undo the harms caused by years of prohibition,” continued Smith. “As more and more states move to regulate cannabis, it is completely unfair to continue saddling people with the lifelong negative effects that come with a criminal record, nor should a past arrest be a barrier to taking part in the burgeoning cannabis industry. While much more work needs to be done at the state and federal level, the Marijuana Justice Act sets an excellent example for others to follow, and will make it much easier for states to make necessary reforms to address this injustice and maximize the opportunities created by a legal cannabis market.”

Rep. Lee is also reintroducing a cannabis-related bill and resolution in the House today. The Restraining Excessive Federal Enforcement & Regulations of Cannabis (REFER) Act would prevent the federal government from using funds to interfere with state cannabis programs, target businesses or individuals in compliance with state cannabis laws, or penalize financial institutions that work with those businesses. The Realizing Equitable & Sustainable Participation in Emerging Cannabis Trades (RESPECT) Resolution recognizes that the people most harmed by the racially disparate enforcement of prohibition benefit the least from some of the state and local policies regulating the cannabis market. The resolution urges officials and lawmakers to implement a series of practices when granting licenses for legal cannabis businesses to improve access for these communities to the nascent industry, such as minimal application and license fees, no caps on the number of licenses, increased local control of the licensing process, and removing broad felony and cannabis convictions as automatic disqualifiers for participation.

With dozens of supportive members of Congress now in office and Democrats in control of key federal committees, advocates are confident that comprehensive cannabis policy reform legislation will be actively considered in the House in the 2019 session. Draft legislation to allow banks to more easily work with the cannabis industry received a supportive hearing in the House Consumer Protection and Financial Institutions Subcommittee earlier this month, and bills to address unfair federal taxation of cannabis businesses, veteran access, and increased research are expected to make significant progress this year as well.

Cannabis is legal for adults in ten states and the District of Columbia, and 33 states, D.C., as well as several territories have effective medical cannabis laws. The substance is legal in some form in 47 states. In February, legislative committees in four states approved cannabis legalization bills, and many more states are expected to consider the issue this year.