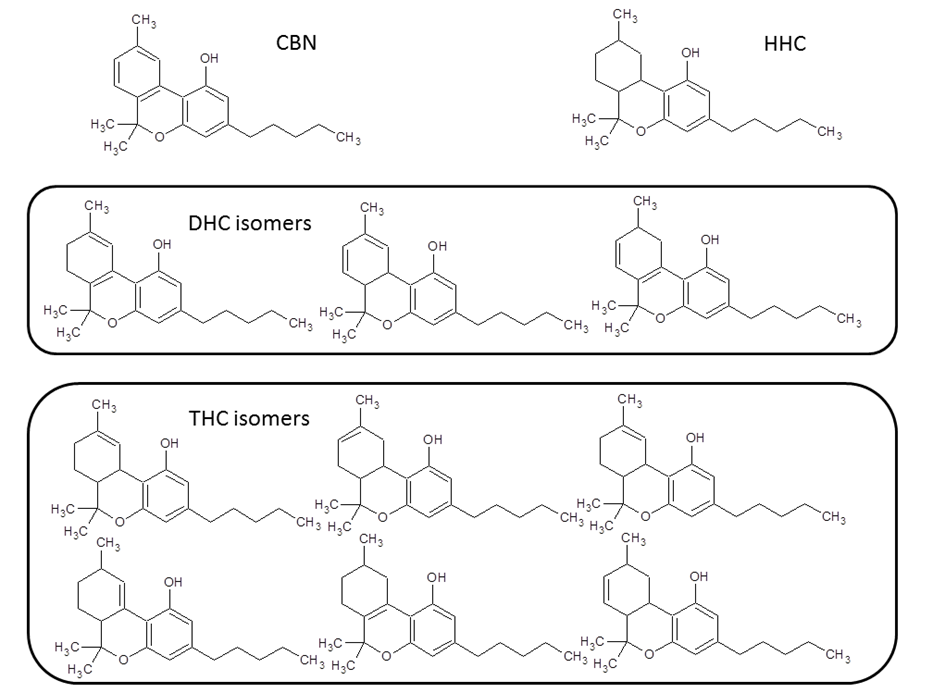 As outside industries fuse with the cannabis market, we will begin to see innovations that will flesh out our understanding of cannabinoids and how they interact with the human body. I had the opportunity to sit down with chemist Dr. Mark Scialdone and Chris Barone, founder and lead chemist at The Clear™ to discuss the introduction of semi-synthetic cannabis compounds to the market. We focused on hydrogenated cannabinoids; cannabis with a slight twist that could change everything about why and how we consume cannabis.

Hydrogenation is simply treating a compound with hydrogen, which causes a chemical reaction between hydrogen (H2) and another compound or element, usually in the presence of a catalyst such as nickel, palladium, or platinum. This is done in order to reduce or saturate organic compounds, imbuing them with properties the original compounds did not have. These cannabinoid analogues (or semi-synthetic compounds) have a number of applications in manufacturing and medicine.

Hydrogenation is a minor modification to the natural framework of the compounds the cannabis plant produces biologically. Barone describes the process as, “adding hydrogens across the double bonds, thus changing the molecular weight, the molecules geometry, and also its effects on the body.”

A major benefit to hydrogenation is that it offers stability at the molecular level, assisting with both shelf life, and resistance to heat. Scialdone explained, “hydrogenation is a chemical transformation on unsaturated compounds to improve their stability and resistance to thermo-oxidative breakdown,” – which occurs when these compounds are in the presence of air. This is the reason you cannot leave cooking oils on the counter exposed to sunlight, as eventually this reaction will cause them to go rancid. Hydrogenation improves the oxidative stability by removing the unsaturation.

Difference Between Natural and Semi-Synthetic Cannabinoids

There is still much research to be done to define the exact pharmacological differences between hydrogenated and their plant-derived cannabinoids, but the chemical differences are quite distinct. “Tetrahydrocannabinoids like THC are metabolized into the 11-Hydroxy-THC-metabolite and ultimately the nor-carboxy-THC-metabolite; because we’ve converted the THC to HHC, metabolites will differ from the ones derived from THC,” explained Scialdone. Thus, they will have a different pharmacokinetic profile because the metabolites are going to be different in hydrogenated compounds. Meaning, the hydrogenated compounds could have a longer half life and bind to different receptors within the ECS.

A study published in the Journal of Medicinal Chemistry evaluates the ability of various cannabinoid analogues to modulate the production of reactive oxygen intermediates (ROI) various metabolic functions as well as their binding capabilities to the cannabinoid receptor (CB1). It was found that hydrogenated CBD and Cannabidiol-dimethylheptyl (CBD-DMH) demonstrated bioactivities different from their original compounds (source). The study focused on the anti-inflammatory and immune responses that have been previously observed in the non-analogue compounds. To compare the hydrogenated cannabinoids, they observed the derivative compounds for their ability to suppress the production of ROI, nitric oxide (NO), and tumor necrosis factor (TNF-⍺) by activated macrophages in vitro. Some of the compounds (7 and 4) exhibited an increase in their suppressive effects of NO, TNF-⍺, and ROI. Compounds 7 and 8 are strongly bound to the central cannabinoid receptor (CB1), but with an opposite effect on their ability to modulate the release of inflammatory mediators. When compared to the effects of natural cannabinoids, it is noted that isolated cannabidiol (CBD) also has tumor growth suppressive qualities, with similar functions of hydrogenated CBD (source). The distinction between the two is the bioavailability and slow breakdown of the hydrogenated compounds, however more research is required.

The JMC study concluded, hydrogenated cannabinoids exhibited good binding to CB1, but have varying effects on inflammation – which could spring opportunities for anti-inflammatory and immunosuppressive properties in murine collagen-induced arthritis, as suggested by the Ben-Gurion University. This is because the hydrogenated cannabinoids seem to have a strong effect on hyper-inflammation, which would reduce pain and swelling of the joints.

When dealing with new compounds, it is crucial that health and safety are considered. “We will want to look at what impacts the hydrogenation has on the metabolic profile, and whether or not the hydrogenation is having a beneficial impact on biological actions with the cannabinoids,” explained Scialdone.

It will still take a few years for a product like this to be available to the public. Although the market may see hydrogenated cannabinoids present in medical and recreational states sooner, extensive research on these compounds will remain difficult under current federal laws. The Federal Analog Act states any substance derived from a schedule I or II substance will be treated as the same schedule substance when its purpose is for human consumption. “Pseudo-synthetic cannabinoids should be allowed in my opinion,” Barone adds, “but only through close analysis of the SOPs and quality control conditions. In states where they do not have the resources, I believe manufacturers should be mandated to hire third-party chemical manufacturers to audit and approve the techniques being used.”

Research in this arena will provide greater understanding as researchers gain further understanding about hydrogenated cannabinoids and their impact on the human body. Barone pointed out, “I’d like to emphasize that the human interaction with this molecule is the driving force of the progression. Without the idea and the human, the molecules sit untouched and unexplored.” Utilizing the unbound creativity of science, the cannabis plant has more to offer than we once knew.

Courtney Maltais is co-founder and lead biologist at The Clear; a California-based extract company that brought the first Cannabis distillate to market in 2013. Maltais works with industry leaders in cultivation, manufacturing, and product development to create efficient, safe, and standardized lab practices. Her passion for science and education has led her to expand into educational outreach for both business owners, employees, and consumers alike.