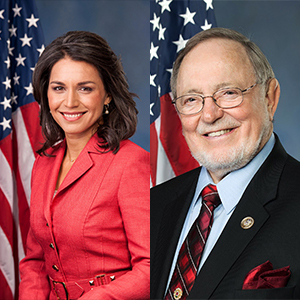 WASHINGTON, D.C. – A pair of bills was introduced today by Rep. Tulsi Gabbard (D-HI) and Rep. Don Young (R-AK), adding to a steadily increasing slate of cannabis-related legislation being submitted to Congress for consideration this year. The Ending Federal Marijuana Prohibition Act would remove cannabis from the Controlled Substances Act and effectively allow states to determine their own cannabis policies and put an end to federal cannabis prosecutions. The Marijuana Data Collection Act would require the National Academy of Sciences to study and report on the status of state cannabis programs and their impact on public health, safety, and the economy.

“We are grateful to Representatives Gabbard and Young for adding to the bipartisan chorus of voices in Congress calling for cannabis policy reform by introducing these bills,” said Aaron Smith, executive director of the National Cannabis Industry Association. “States should be able to make their own cannabis laws without fear of federal interference, and lawmakers deserve to see comprehensive research on what an increasing number of states are already proving – that regulating cannabis works.”

“We look forward to a study conducted by an independent federal agency that isn’t invested in continuing marijuana prohibition,” Smith continued. “Lawmakers and regulators at the state and federal level will benefit from a study that takes a serious look at the effects of making cannabis legal for medical and adult use. There is already plenty of evidence showing that regulation is working in the states, but we need to look at the potential public health and economic impacts of further reforms, and the real costs of continuing to ban a substance that has proven medical benefits and whose prohibition continues to cause massive societal harms.”

Both bills are reintroductions from last year, when they received bipartisan support in the House. In that session, the Ending Federal Marijuana Prohibition Act had 39 cosponsors, and the Marijuana Data Collection Act had 34 cosponsors.

Cannabis is legal for adults in ten states and the District of Columbia, and 33 states as well as several territories have effective medical cannabis laws. The substance is legal in some form in 47 states.