The National Cannabis Industry Association’s second annual Cannabis Business Summit took place June 29-July 1 in Denver at the Colorado Convention Center. With attendance surging to nearly 2,000 this year, an expo hall filled with 100+ exhibitors, three full days of educational programming with over 135 speakers, and the bi-partisan involvement of four members of Congress and one Colorado state representative, the symposium represented the rapidly growing, maturing, and increasingly normalized cannabis industry developing here in the United States. Here we take a look, day-by-day, at what took place over the course of three days:

The Cannabis Business Summit & Expo kicked off with workshops, tours, and Canopy Boulder’s demo day. The eight workshops featured a wide range of topics, including:

Those who signed up for tours got a special treat visiting the Dixie Brands, CannLabs, or EvoLab facilities. 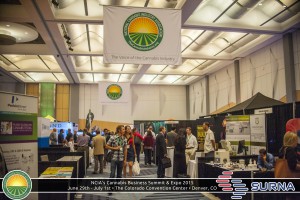 Canopy Boulder rounded out the afternoon by conducting an investor demo day, featuring ten companies that have been participating in Canopy Boulder’s Spring Class of their incubator program. Immediately following, a networking reception officially opened the greatly expanded exhibition hall. Check out this piece from Reason magazine which highlights some of the many sponsors NCIA had on the expo floor. 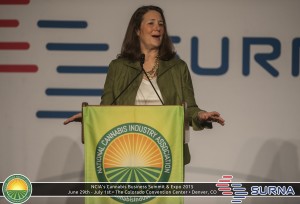 Day Two’s primary focus was on the mainstream political support we are increasingly seeing behind cannabis policy reform. The day began with a moving video Welcome Address by Senator Kirsten Gillibrand (D-NY), co-sponsor of the CARERS act. NCIA executive director’s opening keynote was preceded by welcoming remarks from Denver Congresswoman Diana Degette, who thanked the industry for being responsible business people and spoke for the need for continued bipartisan support from legislators.

After the morning sessions, attendees broke for lunch, where they had the chance to attend a speech by Rep. Dana Rohrabacher (R-CA), one of the industry’s most consistent and vocal champions in Congress. If you missed the luncheon, check out this great Bloomberg interview with Rep. Rohrabacher. 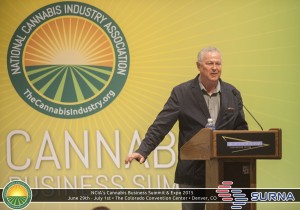 After lunch, in what has been called a historical first, U.S. Senator and Republican presidential candidate Rand Paul (R-KY) joined in the activities by holding a private fundraiser at the Summit. Sen. Paul met with NCIA members to learn more about the problems they face due to outdated federal law, offering an unprecedented opportunity for industry leaders to directly address these issues with a presidential candidate vying for our nation’s highest elected office. 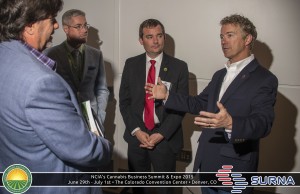 The afternoon featured five different educational tracks including “Running Your CannaBusiness,” “Cultivation and Processing,” “Money Matters: Finance, Accounting, and Insurance,” “The Law, Policy, and Reform,” and “Emerging Topics.” Educational sessions throughout the afternoon ranged from “Analysis of Different Lighting Technology: HPS, Plasma, & LED” to “Defining the Limits of the IRS Authority over COGS: CCA 201504011 Explained”, “Boutique Cannabis: The Case for Small Business” and “Trademark Enforcement”.

The panel “National Outlook on Evolving State-Wide Regulations” finished up the programming for the day. The session featured an in-depth look at what types of policies and regulations are evolving nationwide, to give attendees a broad view of what’s happening across the United States, and what we can expect as more states come on line in the coming years.

The renowned Cannabis Carnival took place at the Fillmore Auditorium later in the evening, where 1600+ cannabis industry leaders & enthusiasts converged for one unforgettable night to celebrate progress and to support continued reform. Read the full recap here. 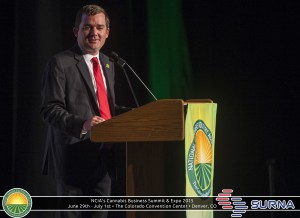 Day Three focused heavily on emerging topics in the cannabis industry and started out with the opening panel “Increasing Diversity within the Cannabis Industry.” It’s not a secret that minorities are not advancing as quickly in the cannabis industry as their white, male counterparts. This discussion took an in-depth look at the causes for this, what responsible business owners can do to create more diversity within their workplace, and why it is important to do so.

Breakout sessions for the day featured yet another diverse list of topics. This included “Preventing & Surviving an Armed Robbery,” “Managing the Operations of an Edibles Kitchen,” “To Spray or Not to Spray, That is the Question,” and “Sungrown Cannabis Cultivation – The Movement Towards Outdoor.”

Closing out the conference were two fireside chats, both focusing on different avenues of sustainability in the cannabis industry: “Building Customer Loyalty” and “The Greener Way – Innovative Steps Towards a Sustainable Industry.”

We cannot thank all of our speakers and sponsors enough for participating, and contributing to another successful annual summit. Let’s keep the energy, growth, and education going – register for our upcoming Fall Regional Cannabis Business Summit taking place in New York City, September 21-23.

Immerse Your Business at #CannaBizSummit