VIDEO: The Importance of Making Your Voice Heard in D.C. 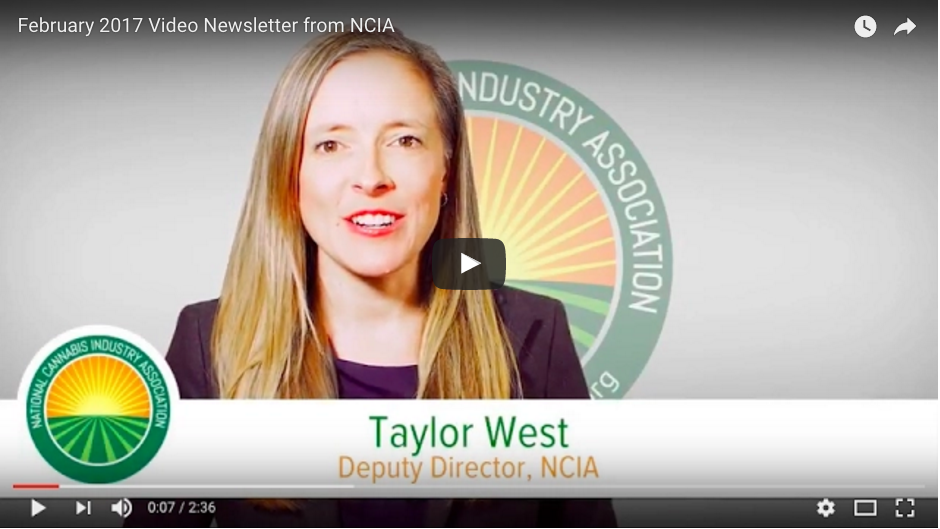 NCIA Deputy Director Taylor West delivers this month’s video newsletter, encouraging you to get involved and make your voice heard to the new administration and new Congress. As NCIA prepares for our 7th Annual Cannabis Industry Lobby Days, there’s never been a more important time to speak up for your business and the industry we’re building together by engaging with our advocacy work on Capitol Hill in Washington, D.C.

Thank you to the co-chairs of NCIA’s Policy Council for their premier sponsorship of our 2017 Cannabis Industry Lobby Days:

Are you interested in sponsorship opportunities for your company at NCIA’s most important policy event of the year? Contact us at sponsorship@thecannabisindustry.org to find out more!

Bethany Moore: You’ve been working as Deputy Director of National Cannabis Industry Association since last winter. What are your responsibilities and how do you like working in the cannabis industry?

Taylor West: Working in the cannabis industry has been one of the most exciting, interesting, and educational jobs I’ve ever had. As one of our members told me, cannabis industry years are kind of like dog years – one is equivalent to seven in any other business. That certainly feels like it’s been true for my first year!

My job at NCIA covers a lot of different areas, but one of the most important is strategic communications and media relations. Our industry is in a very bright spotlight these days, with an intense amount of media interest. I try to make sure we’re telling the real story of our members, highlighting the businesses that make up our responsible, legitimate, and community-engaged industry. It’s really important that policymakers understand that we are an industry of hard-working, innovative small-business people, and that we deserve to be treated fairly.

The Obama administration on Friday gave the banking industry the green light to finance and do business with legal marijuana sellers, a move that could further legitimize the burgeoning industry.

For the first time, legal distributors will be able to secure loans and set up checking and savings accounts with major banks that have largely steered clear of those businesses. The decision eliminates a key hurdle facing marijuana sellers, who can now legally conduct business in 20 states and the District.

The conflict between federal and state marijuana laws has become a bigger issue as more states legalize the drug for medical and, more recently, recreational, uses. Dispensaries in the other 19 states that have legalized medicinal cannabis have run into similar banking problems, requiring entrepreneurs to hide the nature of their business, establish separate holding companies, or just haul around bags of cash.

Last week, Attorney General Eric H. Holder Jr. said that legal marijuana businesses should have access to the banking system and that the Obama administration would provide rules aimed at easing banks’ concerns, mainly by making these activities low priorities for federal prosecutors.

Bank officials in Massachusetts, however, are far from assured, worried what might happen under different administrations. Their preferred solution: changing federal law.

Fifty-five percent say they would support laws in which adults 21 and older are allowed to buy limited amounts of marijuana for personal use.

About a quarter would not approve of legalizing marijuana, but they wouldn’t actively oppose it either. Nineteen percent would actively work to oppose and overturn any legalization efforts.

There is no question that marijuana has changed Colorado’s image. Whether that’s for the better or worse is still up for debate.

“To the extent that the cannabis industry has changed Colorado. I think Colorado has even more changed the image of cannabis industry. We are showing the world that there is a sensible alternative to the underground black market for marijuana by taking it off the streets, out of the underground and putting it behind a highly regulated counter,” Taylor West of the National Cannabis Industry Association said.

DENVER — Brandon Coats was working as a customer service representative for Dish Network when he was given a random drug test in spring 2010. Although he had worked there for three years, the company fired him when the 30-year-old quadriplegic tested positive for marijuana.

Coats — who has used a wheelchair since age 16 after a car he was riding in crashed into a tree — says he uses marijuana to control his muscle spasms, which weren’t alleviated by other pharmaceuticals.

“It’s a matter of need, and not a matter of want,” Coats’ attorney Michael Evans told BuzzFeed of his client’s marijuana use.

Coats sued Dish Network, arguing that his medicinal marijuana use was legal and that he was never impaired while working, but the trial judge quickly dismissed the case.

The court decided Colorado’s Lawful Off-Duty Activities Statute, which prohibits employers from firing employees for participating in legal activities during their free time, like gambling or drinking alcohol, doesn’t apply to marijuana. For the judges, the fact that marijuana is still a federal crime means it is unlawful across the board and the protections of the law don’t apply.

SPRINGFIELD – Even after the state implements rules for the sale of medical marijuana, federal banking regulations could make Illinois’ budding cannabis industry a cash-only operation.

While Illinois already has moved to legalize the use of marijuana for certain medical conditions, federal regulations prevent marijuana dispensaries and related businesses from using federally insured banks.

“What it means for a lot of businesses is that they’re forced to operate entirely in cash,” said Taylor West, deputy director of the National Cannabis Industry Association in Washington, D.C. “That’s not just the sales side. It also affects the business side.”