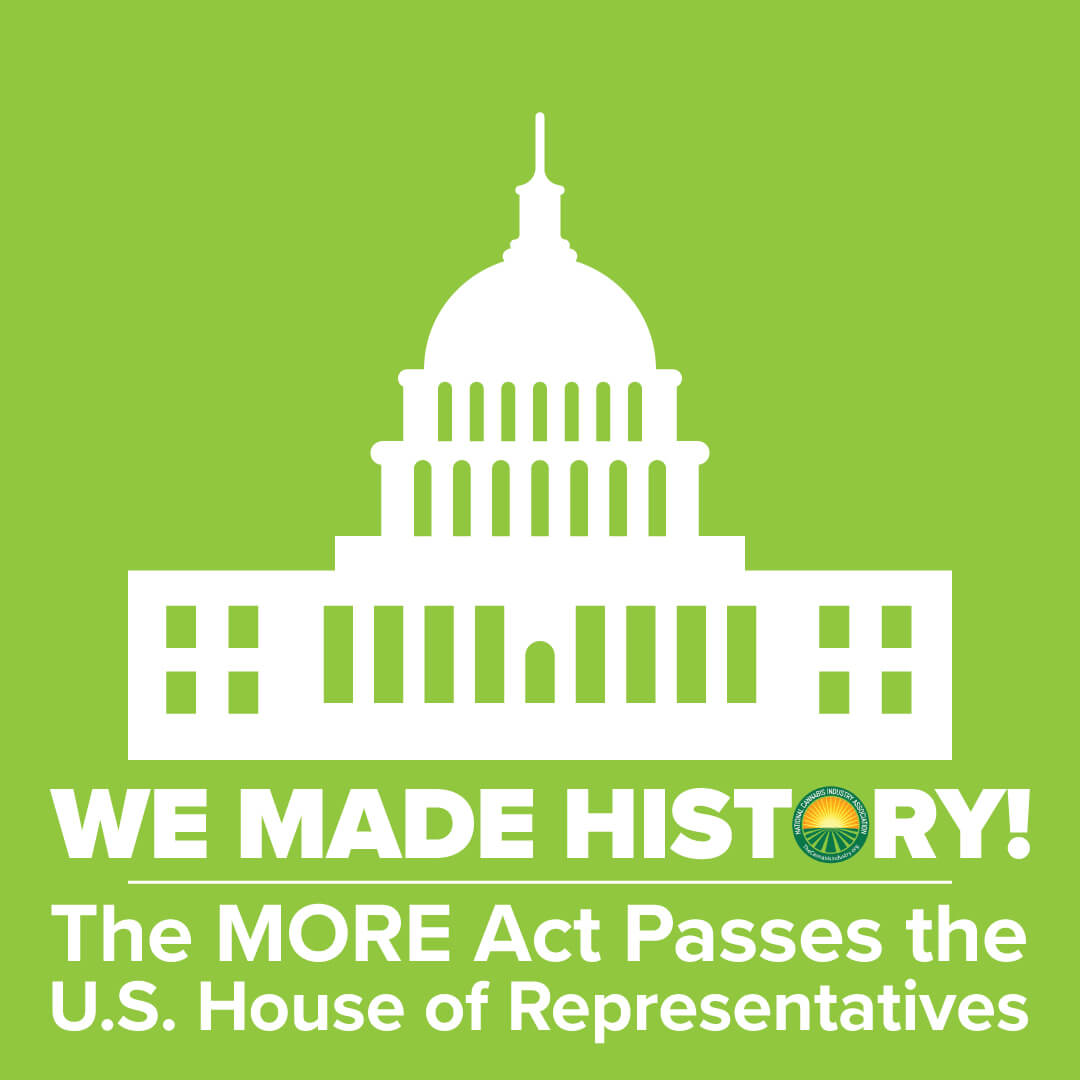 On Friday, December 4, the House of Representatives made history by voting to approve H.R. 3884, the Marijuana Opportunity, Reinvestment, and Expungement (MORE) Act. The MORE Act would remove marijuana from the federal Controlled Substances Act and work to repair the social and personal harms caused by federal marijuana enforcement. This is the first time since marijuana was made federally illegal that either chamber of Congress has held a floor vote on- or approved- a bill to make the substance legal again. The final vote count of 228-164 fell mostly along party lines, with five Republicans crossing the aisle to support, and six Democrats voting to oppose.

This monumental victory shows just how far Congress has come over the years. Although this vote more closely aligns the House of Representatives with the majority of voters who overwhelmingly support cannabis legalization, the Senate is a different story.

As we have seen over and over again, the Senate Republicans continue to obstruct cannabis reform measures. The House passed the SAFE Banking Act in September 2019 and included the SAFE Banking language in two COVID-19 relief packages, however, there has been little activity on these topics in the Senate. Republican Senators have repeatedly spoken out in opposition of bringing up cannabis policy amidst the pandemic, stating that it’s not the time or place. But as I mentioned before, it’s also important to note that the House has passed not one, but two COVID relief packages in the last 6+ months that the Senate (namely, Leader McConnell) has refused to take up. That being said, despite a global pandemic, support for cannabis reform remains strong, a recent Gallup poll showed a record 68% of Americans support making cannabis legal. On Election Day, voters in Arizona, Montana, and New Jersey approved measures to regulate cannabis for adults, while Mississippians overwhelmingly approved a medical cannabis referendum, and voters in South Dakota passed both adult-use and medical initiatives. The vote and passage of the MORE Act on the House show that House leadership is listening.

The MORE Act, sponsored by the House Judiciary Committee Chairman Jerry Nadler (D-NY) and 120 cosponsors, would not only mitigate the federal-state conflict by removing cannabis from the Controlled Substances Act, but it would also require the expungement of past federal cannabis convictions. The bill would also establish a Cannabis Justice Office to administer a program to reinvest resources in the communities that have been most heavily impacted by prohibition, funded by a tax on state-legal cannabis commerce. It would also allow the Small Business Administration to provide loans and grants to cannabis-related businesses and support state and local equity licensing programs, permit doctors within the Veterans Affairs to recommend medical cannabis to patients in accordance with applicable state laws, and prevent discrimination based on cannabis consumption during immigration proceedings.

When the House version of the MORE Act was originally introduced in 2019, it was referred to eight Committees (with the Judiciary Committee being primary). Each Committee had provisions of the bill that fell under its jurisdiction and had authority to hold hearings and or amend specific jurisdictional provisions. Two Committees (Energy and Commerce and Ways and Means) were expected to be very active on language affecting regulations and taxes. The Energy and Commerce Committee even held a legislative hearing on MORE in January, and were expected to hold more… and then COVID hit… and priorities changed.

Before the Floor vote, the main sponsor of MORE, Judiciary Chairman Jerry Nadler, offered a “manager’s amendment.” The majority of the language was taken straight from H.R. 1120/S. 420: the Marijuana Revenue and Regulation Act. It included a graduated tax, and language on federal permitting and bonding. During debate, Congressional leaders gave assurances to include the cannabis industry advocates in future discussions and listen to cannabis industry concerns. Although passage of the MORE Act is historic, no legislation is perfect and NCIA staff will continue working with congressional champions to improve MORE and eventually get it passed into law.

Now, as we near the end of the 116th Congress, the NCIA team will continue to work and strategize various ways forward in Washington, D.C– on SAFE Banking, the MORE Act, and beyond. As we see more and more legislative victories each Congress, it is important to relish in our success and continue to propel the momentum forward (we could all use a moment to celebrate after 2020!). The MORE Act vote, being the most comprehensive cannabis bill on Capitol Hill, gives us the momentum to accomplish more in the next congressional session. Thank you to each and everyone one of you who took the time to call your Representative. Stay tuned for the 117th Congress!

Video: NCIA Today – The MORE Act, 2020 Election, Board of Directors, and More!