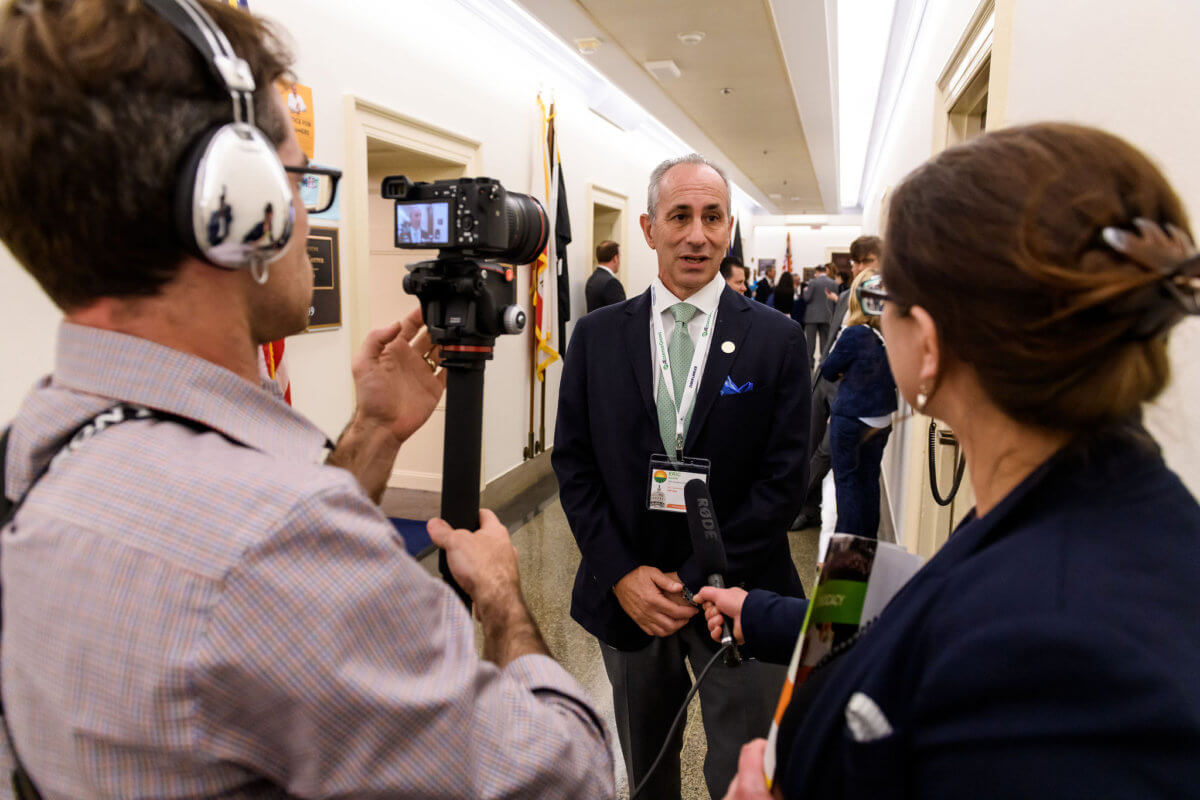 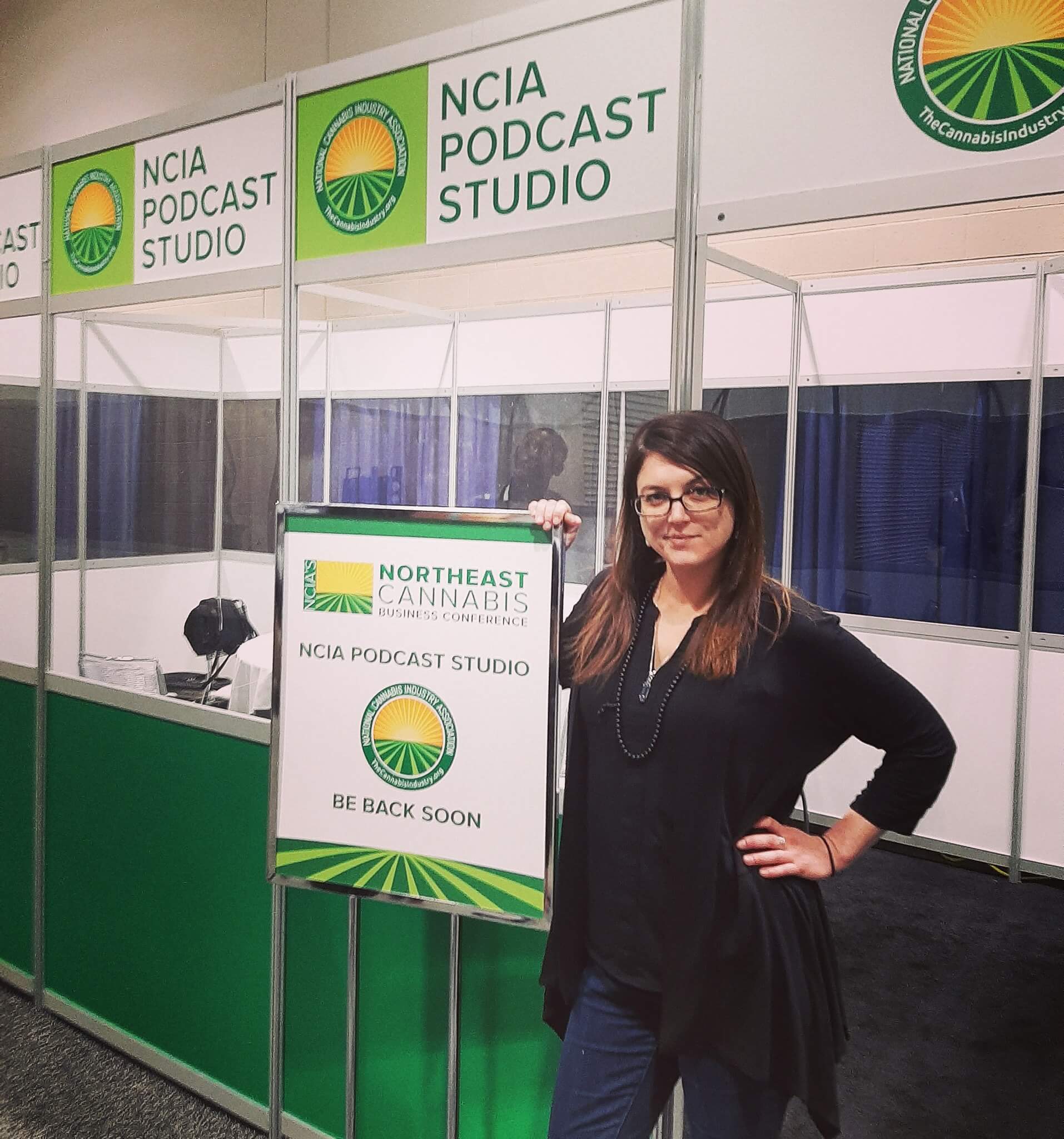 Some of you may already know me from seeing me around at NCIA’s trade shows and regional networking and educational events over the years. I began working at NCIA in January of 2014, just a couple of weeks into legal adult-use (recreational) cannabis sales in Colorado, which is hard to believe was over six years ago!

I moved to Denver from the Washington, D.C. area and jumped head-first into my role at NCIA, which at the time was as the Membership Coordinator, joining a team of just five passionate individuals in those early days.

Going back a few years to my time in the D.C. area, I graduated high school in Southern Maryland in the year 2000 and was thrilled to move an hour or so north to start my freshman year of college at the University of Maryland, College Park. My intentions were to major in Journalism with a minor in something like “Interfaith Studies.” I had already started my publishing career at the county newspaper, The Enterprise, in my Junior and Senior year of high school through a school-to-work learning program I had signed up for, where I worked closely with the newspaper’s editorial staff to learn the ropes. 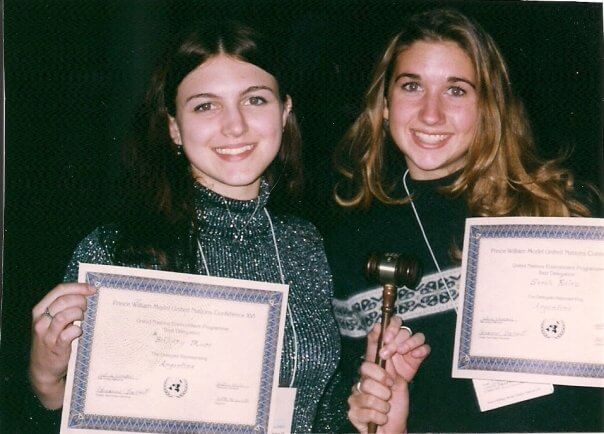 Unfortunately, my father, who is a Vietnam Marine Veteran, was diagnosed with a very rare cancer that winter which had been caused by Agent Orange exposure decades before. We were told he had two years to live. He began undergoing chemo and radiation treatments, which eventually lead to surgery. This changed life as we knew it for our family, as you can imagine. Today, 20 years later, I’m happy to say my father is alive and well, and happily toiling in his garden in retirement.

I withdrew from the university and moved back to be with my parents for a while, working full time in retail management and studying business courses in my spare time. Wanting more career opportunities than rural St. Mary’s County could offer me, a year or so later, I moved back up to the D.C. area and jumped into the next phase of my career. I spent three and a half years working at the National Foreign Language Center at the University of Maryland, a think-tank-turned-technology non-profit that produces online learning modules for government and military. I started in an administrative position, but eventually moved into the role of Audio Studio Recording Manager, working with native speakers from all over the world, which was truly an enlightening and fulfilling experience. I also “moonlighted” here and there as an audio engineer at Radio Free Asia.

During that time, I discreetly began my activism for medical cannabis reform. After all, it was the early 2000’s, and cannabis wasn’t as widely talked about in a normalized way as it is today. I was even at odds on this topic with some of my friends at that time. I, myself, had begun using cannabis to treat intense anxiety, depression, and insomnia, which inspired me to do further research about the legalization movement and history. On top of that, my interests in healing arts, herbal medicine, and nature-based spirituality coincided with this newfound passion. I began volunteering with the Maryland state chapter of Americans For Safe Access, and spent time learning from my fellow advocates, many of which are now successful in the cannabis industry and some even serve on NCIA’s Board of Directors. This nostalgic progression of advocacy to industry over the years delights me to no end.

My next career jump in 2006 was inspired by my desire to do interfaith work of some kind, professionally. I personally have followed a nature-based spiritual practice called Paganism, or Wicca, since I was about 12 years old. While I am “out of the broom closet,” I don’t usually talk about that in a professional setting, so I was thrilled to “mix politics with religion” when I was hired as a Campaign Project Manager at Americans United For Separation Of Church And State (AU for short). From 2006 to 2008, we teamed up with The Interfaith Alliance on the First Freedom First Campaign to educate America on various issues ranging from same-sex marriage freedoms, to end-of-life care decisions, to keeping science in the science classroom. My favorite slogan from the campaign was “Democracy, Not Theocracy!” 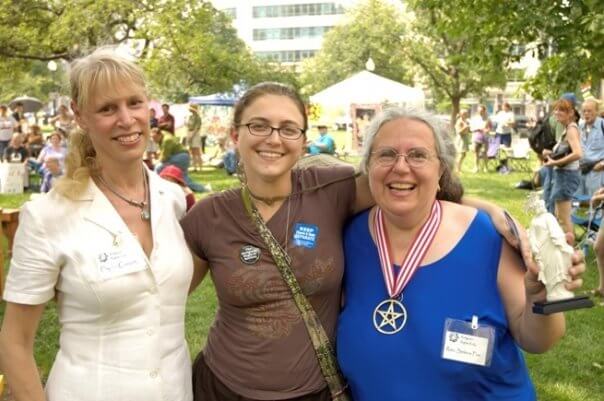 In addition to the nationwide educational campaign leading up to the election of President Barack Obama, AU also took on a lawsuit that is very special to my heart. In fact, I remember running upstairs to the third floor where the lawyers sat and asking one of my colleagues if this particular situation I’d heard about, which would later be known as The Pentacle Quest, would be something that the organization would be interested in commenting on or supporting. My colleague said he would look into it, and lo and behold, shortly thereafter, our organization had taken on a lawsuit against the Department of Veterans Affairs for discrimination against Wiccans and Pagans who had served and fallen in our military. To make a long story, which I am extremely passionate about, shorter, I will simply say that our team, alongside the Pagan community and our nation’s military veterans, won this lawsuit in 2008 which now allows Wiccans and Pagans to have a five-pointed star, the pentacle symbol commonly associated with our spiritual community, on the gravestone markers and plaques of those who served. This is a time in my early career that I look upon fondly and proudly.

Of course in 2008, as most of us remember, the economy began to suffer and thus entered The Great Recession. As my two-year contract at AU wrapped up, I took a position as a marketing director for a structural engineering firm for a few months until the nationwide layoffs eventually got to me as well. It was a time when those with prestigious Master’s degrees or higher were fighting over entry-level jobs. From there, at the age of 27, I was right back at square-one, along with many others across the country. 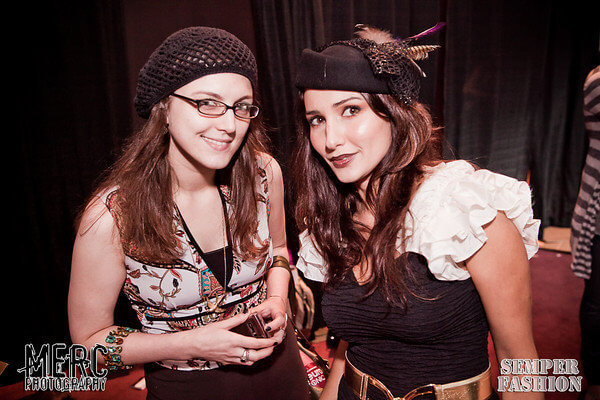 So… “what the hell!”… I moved to Portland, Oregon, to try something different from the hustle and bustle of the Beltway. I spent two and a half years there, trying out my entrepreneurial sea legs, stitching side gigs, part-time jobs, and consulting work together doing public relations and media work (Portland fashion scene, anyone?) to make ends meet.

In early 2011, I received a job offer to move back to Maryland to work as a Multimedia Technology Project Manager at an international financial institution. I enjoyed two years in this high-tech corporate environment as much as the average person might, but again saw department closures and layoffs, which eventually made its way to me. Again. 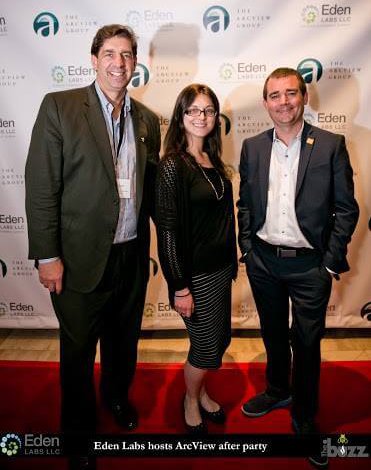 However, this time, something greater was afoot, as the position for a Membership Coordinator at NCIA opened up, which I immediately applied for and was hired shortly thereafter.

Over the last six-and-a-half years, I’ve helped NCIA and the blossoming industry across the country grow larger and expand, and have watched it endure ups and downs, and trials and tribulations, but ultimately come together to create an industry that we can all be proud of.

Serving as NCIA’s Communications Manager, I’ve been truly blessed with the gift and opportunity to serve our industry alongside NCIA members and my team. For nearly four years, I’ve hosted our weekly podcast, ‘NCIA’s Cannabis Industry Voice,’ and worked with NCIA members, committees, allied associations, and staff to produce blog articles, white papers, videos, and more to keep our industry informed, inspired, and connected. I tend to dislike the word ‘marketing’ and prefer to think of my role as that of a facilitator, a storyteller, of our movement, industry, and community. 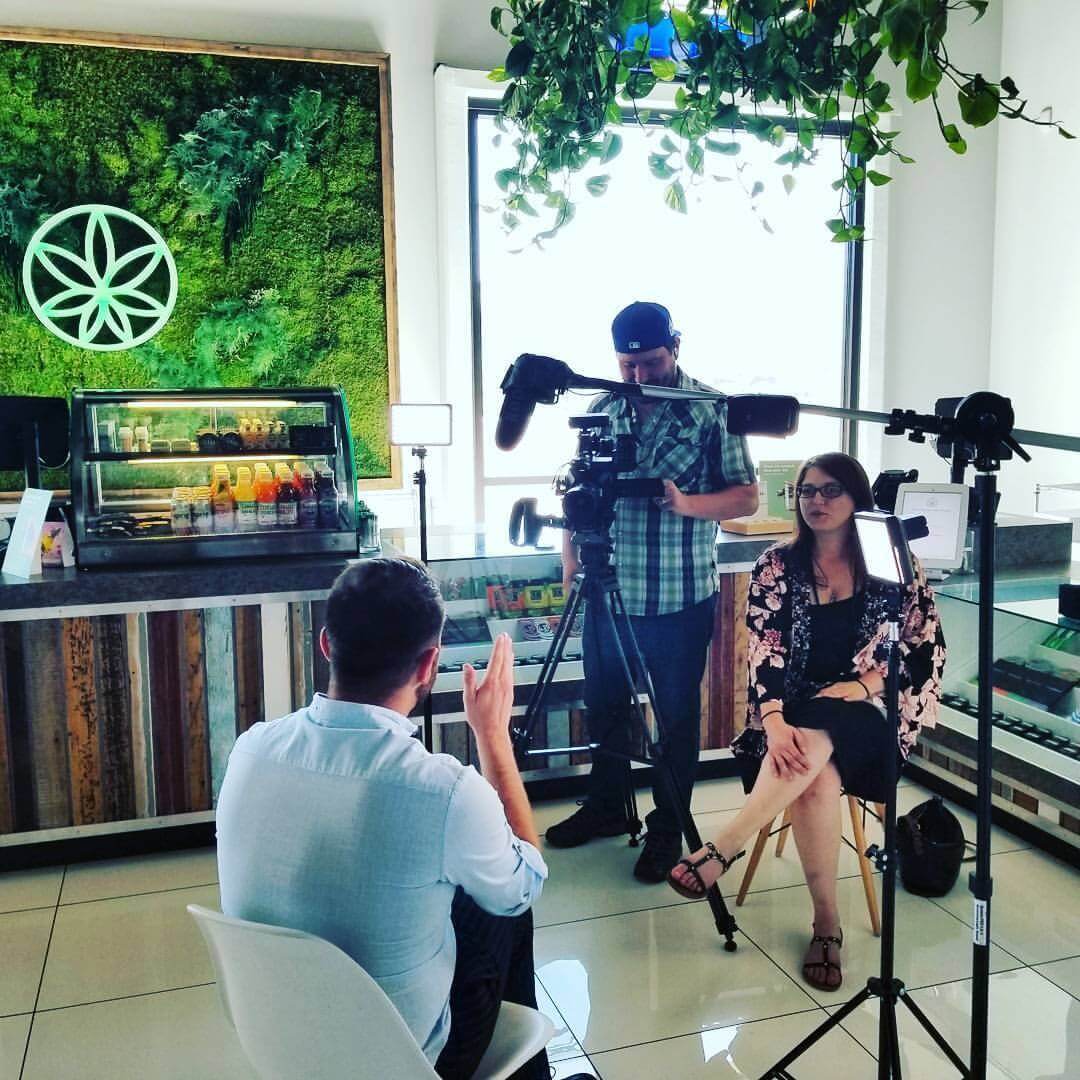 When I’m running around out in the wild, I enjoy playing pinball machines and invite anyone to challenge me to a game. In addition to my witchy, nature-based spiritual path in which I attempt to align myself to the cycles of nature and the cosmos, I also have been writing poetry since I was very young, and currently have four self-published poetry books under my belt, which all feature themes of spirituality, ritual, and nature. Catch me at a poetry open-mic night sometime! In addition to being a lover of jazz music, I also write songs and was a singer in a couple of bands in the D.C. area many years ago, but these days I just sing in the car, or at karaoke bars (pre-COVID-19).

I’m proud to be serving NCIA in my sixth, going on seventh year at an organization whose mission I dearly and passionately love and support. Thank you for allowing me to assist in telling our collective and individual stories of our industry and movement.