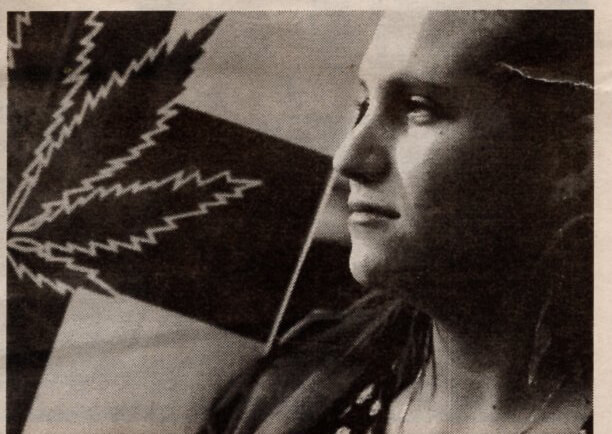 Allied Association Blog: Memories of the Campaign for Prop 215 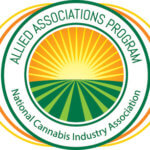 I’ve been helping with the preparations for California NORML’s upcoming 25th Anniversary of Prop 215 Conference and Afterparty occurring this Friday, November 5, 2021.

Scanning my collected newspaper articles from the era for our slideshow has really brought back memories of my early activist days working toward The Compassionate Use Act of 1996, commonly referred to as Prop 215.

Those were the days when you had to say “water pipe” not “bong” for fear of being kicked out of a head shop. I once had a pipe shop refuse to carry hemp lip balm citing that it would imply that their pipes were being sold for marijuana use. Even some in the hemp industry were opposed to associating marijuana with hemp. That said, there were supporters of medical marijuana, and some who just needed education.

I was 24 years old and my relationship with the cannabis plant had been purely recreational. Then I made a new friend, Alan Silverman, who introduced me to a community (and career path) that changed my life. He took me to a screening of a new film, “The Hemp Revolution.” It was an eye-opening event with the director in attendance, and notably several Sonoma County businesses selling their industrial hemp wares. I was deeply inspired, not having known the history and multitude of uses of the plant. I joined the hemp industry with the contacts I met that night, distributing their wares to local shops and tabling at festivals and markets. It was more of a public education service than a profitable business, as many were not familiar with the hemp plant and some saw it as an excuse to promote marijuana. I transitioned into a day job with HempWorld, an industry magazine. These were fun years even if we were ahead of our time.

Alan also told me about a state initiative campaign that was in the planning stages and educated me on the medicinal uses of marijuana. I had previously studied ecology, the idea that our environment has countless symbiotic relationships between lifeforms fascinated me. So, learning about the fiber, oil, and seed of the hemp plant while also gleaning information about medicinal benefits of marijuana just strengthened my impassioned advocacy for both. I felt at the time that consumable marijuana would need to be destigmatized before industrial hemp would ever have a chance. 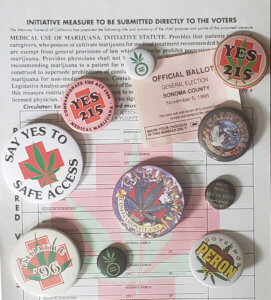 I joined the volunteer group which we at first called “Sonoma County Chapter Californians for Compassionate Use” to match the name of the state-level group behind the current campaign. The term “compassionate use” was not so well known; when I set up our voicemail, the representative thought we were advocating for “Compassionate Youth.”

Being our media liaison, a news reporter from the local TV station called me one morning. The story we had discussed fell through and he asked if there was anything else he could cover. In a few frenzied hours, I was able to find an oncology nurse from a local hospital willing to be interviewed in support of medicinal marijuana. She led me to a medical marijuana patient she knew, who introduced himself to me on the phone by saying, “I’ve been HIV positive for ten years, and I’m fat!” He wanted to be interviewed, too. Enough local activists joined us that afternoon in front of our County Board of Supervisors chambers to fill the camera frame. The nurse requested her interview be conducted apart from the activists, as to not appear a part of our group, which was better optics for our message. She was being brave and outspoken.

We made up small binders with recent news pieces supporting medical marijuana and sent them out to all our local media contacts. We included a commentary published in the Journal of the American Medical Association, an editorial from The Lancet, along with a Universal Press Syndicate piece by William F. Buckley, Jr, and a Cannabis Canada article, “Cannabis Buyers’ Club Flourishes in ‘Frisco,” written by Rose Ann Fuhrman, a fellow local activist and writer. The soon-to-be iconic red cross with overlayed green leaf image was printed for the covers of the binders. 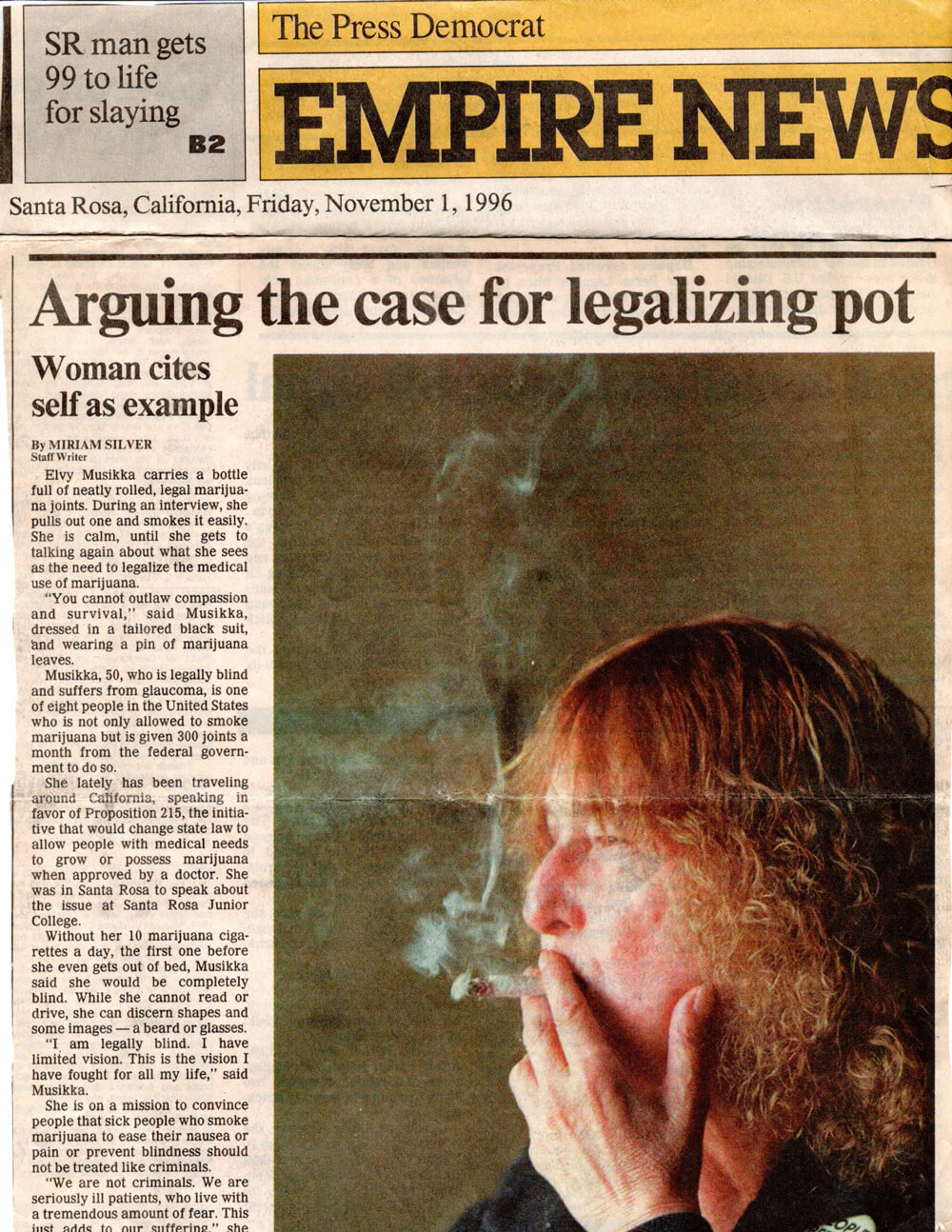 The cross and leaf image for the movement so effectively portrayed the topic, some of us, while gathering signatures, simply wore 11 x 8.5” signs with this image around our necks to gather attention of potential signers.

All in all, Sonoma County was an easy place to gather signatures on this issue. Rather than approach people individually, I’d stand in a trafficked area and repeat the same spiel, it was along the lines of “Sign the medical marijuana petition, it helps with epilepsy, multiple sclerosis, chemotherapy, glaucoma…” I remember one man who walked right past me into a grocery store parking lot, only to turn around when I verbalized the ailment that affected his family member. Another signer who stood out was attending a concert. He walked up to me in the free speech zone between the parking lot and the venue. Signing his name, he said, “I’m a cop. I’m tired of the hypocrites.”

The local coverage that I was most excited about occurred on Friday, November 1, 1996, four days before the election. Elvy Musikka had been traveling around California speaking in favor of Prop 215. Elvy was interviewed by The Press Democrat newspaper about being one of eight people in the United States who not only could legally smoke marijuana, but also was being provided joints by the federal government. The story ran with a large photo of Elvy smoking a legal joint in my living room. Elvy will be speaking at the Cal NORML conference.

Another inconsistency with what most knew at the time was the existence of the San Francisco Cannabis Buyers’ Club. Founded by Dennis Peron, who also wrote San Francisco’s Prop P, this ground-breaking club was raided by the DEA, but enjoyed great local support. Prop P passed by 80% of San Francisco voters in 1991, basically making marijuana possession and cultivation the lowest priorities for law enforcement. Dennis, who passed away in 2018, is a legend in the world of medical marijuana. I had the unexpected experience of meeting him when Rose Ann and I went to his club to pick up the initiatives for our group to collect signatures. We all had barely begun when informed that the first initiatives had a printing error and needed to be replaced. We had car trouble in the city and Dennis invited us to stay overnight in the club, an historic experience I relish. Dennis will be represented at the 25th Anniversary event via a recorded statement and through his family members, Jeff and Bryan Peron.

It was an exhilarating time for me, I met many truly impressive activists, authors, and businesspeople who were inspired to make the world a better place. I felt I was making the world a better place. Ellen Komp, one of my co-workers from my years with HempWorld, went on to become the Deputy Director for California NORML, she hired me onto the organization in 2017. For the 25th Anniversary of Prop 215 events this week, I will be celebrating with many of the folks who made 215 possible. I hope you’ll join us in honoring the history that launched the modern industry.

Kharla Vezzetti is the Business Membership and Advertising Manager for California NORML, a non-profit, member-supported organization that has been advocating for sensible and fair cannabis laws since 1972. She can be reached at kharla@canorml.org